A quintessential archetype of the irreconcilable chasm between studio system’s groupthink and individual’s directorial reign in Hollywood, butchered, reshot, and then cobbled together by RKO studio, THE MAGNIFICENT AMBERSONS, the sophomore feature film of Orson Welles, runs about a concise 88 minutes (almost an hour shorter than Welles’ original version, which is allegedly lost forever), bemoans a tampered chef d’oeuvre that should’ve matched the achievement of CITIZEN KANE (1941).

Set in the belle-époque Indianapolise, The Ambersons is the leading patrician household in the city, Major Amberson (Bennett) begets two children, son Jack (Collins) is a bachelor, daughter Isabel (Costello), after getting miffed by the embarrassment of her sweetheart Eugene Morgan (Cotten), marries Wilbur Minafer (Dillaway), a man she doesn’t really love and they have a son George (Holt), who is terribly spoiled by the family as the only offspring, and becomes a terror of the town.

Nearly 20 Years later, George is a young adult and Eugene, now a widower with an eighteen-year-old daughter Lucy (Baxter), meet for the first time in the Amberson’s mansion, George takes an instant liking for a comely and demure Lucy, but instinctively loathes her father, an innovative investor of the new “horseless carriage” technology, auguring the forthcoming era of automobiles. After his father passes away, George’s instinct is validated when Eugene and Isabel prepare to reignite their passion, and George will go out of his way to nip that in the bud, meanwhile, George’s patrilineal aunt, the spinster Fanny Minafer (Moorehead) is also besotted with Eugene and often is submitted to be the laughing stock of George’s cruel tease.

Tracking the downfall of an aristocratic family, Welles makes a monster out of George the whippersnapper, an enfant terrible whose derision of and detachment from the progressive society, whipped up by his insufferable egotism, renders him and his sort an endangered species, the whole town is waiting for George’s comeuppance, which is ironically brought about by his anathema of all things.

Welles’ groundbreaking idiom of deep focus makes a spectacular impression in the interior scenes (namely, the Ambersons’ palatial residence), counterpoised by mesmeric arrangement of chiaroscuro, and Bernard Herrmann’s sonorous score (also mangled and redacted), the film breathes into life by its own pluperfect imagery alone, where the story goes is taken a backseat, especially with such an obdurately unsympathetic character in the center.

The main cast all has his or her moments, Joseph Cotten eloquently withdraws his ire in exchange of an air of gentility that one might deem erring on the side of being nice; silent film star Dolores Costello is so vulnerable in sight that one might even forgive her for cosseting her heir. Anne Baxter elicits a strong presence of poise and dissembled helplessness when facing off a perennially surly Tim Holt, who does justice to the description “the terror of the town”, a brat born of old money, yet has no facility to carry on the torch. But if anything, the most inexcusable crime of this bastardized final product is that it robs Agnes Moorehead her Oscar glory, even in this retrofitted gallimaufry, a high-octane Moorehead holds our attention and buffets our perception of this tale of the undoing with her undying frustration, wrath and despair, a scathing, pulverizing performer that runs rings around all her co-stars. There is no “what if” is real life, one ought to come to terms with being saddled with an inferior art piece and peers into its glamor without being demoralized by its unfortunate alterations, that is as much as a contemporary viewer can do justice to the work per se. 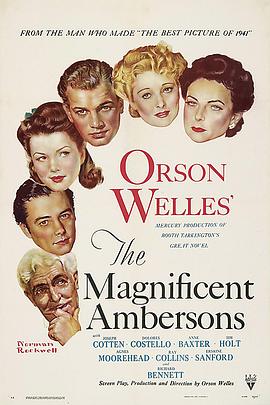