I can assure that Haley Lu Richardson will become a star after her breakthrough performance in this film.

In "Columbus", Richardson plays Casey, a high-school graduate who struggles between her obsession of architecture and the responsibility of taking care of her drug-addicted mother. Casey is in the transition from a child to an adult, and is uncertain of her future. Through the interaction with Jin, played by John Cho, she finally determines to leaves Columbus to pursue her dreams. Richardson, gives a natural, honest and powerful portrayal of the character. Her performance lifts the film from beautifully shot scenery to a new level that is heartfelt, warm and inspirational.

Jin, John Cho's role, is less complete compared to Casey, in the sense that his estranged relationship with his father is not solved in the end. Therefore, to some extent, this is the first time Richardson plays a truly leading role, considering her not-so-important roles in "The Edge of Seventeen" and "Split".
© 本文版权归作者  Messi  所有，任何形式转载请联系作者。
这篇影评有剧透
转发 1
微信扫码
> 在哥伦布 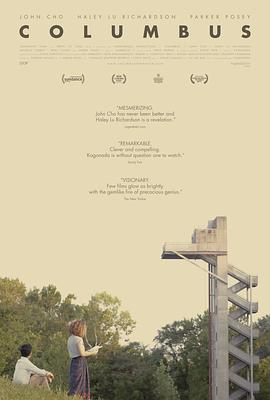