It takes an acquired taste to be comfortably and thoroughly engaged in Cassavetes’ intensely disheartening dramaturgy of bourgeois ennui, FACES isirrefutably a feather in his cup, not in the least for its unsparing cinéma-vérité bravura, one could only imagine watching it in front of a celluloid with those intrusive, sidling über-closeups underlined by that grainy monochrome, how different would it be from anything else in the year of 1968?

Watching in on a TV screen might be a less dizzying experience and it may even lend a helping hand for the audience to become more appreciated of Cassavetes’ scalpel-like dissection of an internecine relationship tangle where no one comes off as unscathed.

The film takes the course roughly within one day, we are peering into the disintegration of a 12-year-old marriage betweenRichard Frost (Marley, who physically resembles an elder version of Cassavetes), a well-off movie financier and his younger wife Maria (Carlin), plus its immediate aftermath. What tickles the idea of divorce into Richard’s mind is another woman, Jeannie Rapp (Rowlands), a classy fille de joie who is tentative by the courtship from one of her patron, whom she might also fall for.Whilst Richard visits Jeannie in her apartment with the presence of her other clients, Maria, pent-up after receiving the bolt from the blue, hangs out with her gal pals in a club and they bring back a young go-go dancer Chet (Cassel) to find some cheap solace, but the problem is always the morning after, does she have the courage to face a new day? What else can a domesticated woman do when she is going to a cast-off?

The story pans out intimately in its interior-exclusive episodes, burnished by what dynamo of a cast, the film galvanizes our attention from A to Z, it is hard to tell whether the dialogue and play-off is semi-improvised or strictly script-based, but Cassavetes relentlessly presses home a brisk tension of fickleness and turns of moods through the lengthy procedures, two friends banter, jape, dance until one of them finds himself becomes an inconvenient third wheel and he snaps; the same coup-de-théâtre occurs almost repetitively in each episode, whether it is between Richard and Maria’s abruptly disconnected duologue, or the tangible disquiet/agitation between Jeanine and her client Jim McCarthy (Avery, a wonderful chameleon), or later the macho confrontation/reconciliation between Jim and Richard. But it is the chapter where Maria and co. facing off a woman-pleasing Chef leaves the most indelible mark, for its utterly frank expose of a lonely woman’s delusion and desperation under the influence of alcohol, the unsung hero here is Dorothy Gulliver's importunate Florence, you cannot help but feeling pity for her, but the pity is concomitant with a whiff of involuntary disgust.

The cast is pure gold, John Marley upstages the rest with hissilver fox allure so damning pungent in every line delivery and gesticulation, deceptively papers over Richard’s dark streak with a winning/poignant combo of open-facedness and bluntness, only belies his shallowness and misery in the morning after as an exasperating cuckold. Ms.Cassavetes, the unparalleled Gena Rowlands drums nuances into every pore of her body and every glance she casts (also thanks to the majestically in-your-face shots to create that stunning effect). However it is two newbies who are given some legitimate Oscar love,Lynn Carlin is stripped down to her raw emotion in her film debut, which powerfully elicits Maria’s clogged mental state and counterpoises its life-threatening after-effect; on the other hand, a blond and youthful Seymour Cassel beautifully oozes sex appeal and wide-eyed sophistication as an unexpectedly selfless symbol of savior to all those wrenched and dissatisfied housewives, his Chet is the diagonal counterpart of Rowland’s Jeanine, only in exeunt omnes, he has to rashly flee from a window whereas she might eventually get what she wants, if one wanna write about sex politics, FACES is a gold mine.

Most suitably, FACES should be ensconced as a smoldering pendant of Mike Nichols’ WHO’S AFRAID OF VIRGINIA WOOLF?, both are hell-bent in tearing down smoke and mirrors to debunk lethargy, inaction and mythomania (among many other maladies) abound in all relationships, dare you to watch them cheek by jowl! 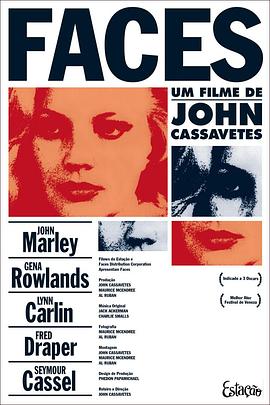