In Godard’s film La Chinoise (1967)，I see several sequences which separate the narrative from the images. One is the idyllic scene that appears when Yvonne is telling about the hardship of her rural life. One is the exterior scene that flies outside the window when the conversation between Veronique and the philosopher is going on the train. This can be considered as being set deliberately by Godard. Theories is a set of words while the reality is a set of images. He separate the words from images so as to reveal the theme of the whole film that can be interpreted as youths who are in petty-bourgeois class，living in capitalist house，are going on nothing but empty talk and theorizing.

There are similar scenes and plots that Veronique is carrying out a combative political dialogue with Guillaume in elegantly furnished room with elegant smoke. It looks like a self-indulgent youth holiday game. This game is to perform the “La Chinoise“，Chinese girl —— children of the bourgeois family dressed themselves as children of Marx, Lenin and Mao Zedong. From this, we can assume that Godard forces the separation through the juxtaposition of bourgeois family sets and political discourse, thus creating an alienation effect and unreliable narrative. Brecht firstly put forwards the alienation effect，the theory of defamiliarization, emphasizing the dismantling of the “fourth wall”and breaking the illusion. Both performance and viewing must be alienated from the complete immersion and recognition of the drama. In La Chinoise，there are not only a large number of performance such as Yvonne and Guillaume protesting against the Vietnam War, but also the direct appearance of camera, and lots of collages, all of which remind the audience that both the action of those youths and the film itself are just performance. 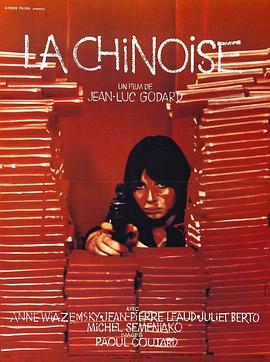