Since rom-com for grown-ups has officially become a dying species in Hollywood-land, one must go back a few years to find some decent ones, ENOUGH SAID, the fifth feature of Nicole Holofcener, is a rare movie showcase for beloved TV megastar Julia Louis-Dreyfus, playing Eva, a divorcée who earns her living as a masseuse, and incidentally twigs that the man she is currently dating, Albert (Gandolfini), is in fact the ex-husband of her new client Marianne (Keener), what will you do under such circumstance?

Like as not, we might have the same reflexive reaction as Eva, who promptly mines the opportunity to get to know the lowdown of Albert by subtly cajoling Marianne to open up about their failed marriage, presumably it gets her an upper hand of appraisal whether Albert is the right person for her, but rubbed off on Marianne’s negative opinions about him, Eva ineluctably puts strains on their inchoate romance, until, she is finally got busted and has to face the music.

As a trenchant object lesson on “one woman’s meat is another woman’s poison and vice versa”, ENOUGH SAID nonetheless, coats its white-bread central crisis with a glistening cast, Louis-Dreyfus’ comical chops and self-deprecating sharp-wittedness spiritedly rounds off Eva’s commonplace but endearing persona, and Gandolfini (reaping awards-season trophies in his penultimate movie, still missing out a posthumous Oscar-nomination, which colors the movie’s serio-comic tone with a whiff of doleful sadness), excellently imparts an avuncular, rough-around-the-edge vibe and vamps it up with his underutilized funny bone, an image couldn’t be more different from his iconic work in THE SOPRANOS, and audience can certainly abandon oneself in the sparks-fly chemistry between these two veteran performers, plus the icing on the cake from a Bohemian Catherine Keener (overcoming the unsavory characterization of a bad-mouthing ex-wife with unfeigned spontaneity and nonplussed frustration) and a radiant but sometimes clueless Toni Colette as Eva’s best friend Sarah.

A secondary plot pivoting on a middle-aged parent’s bittersweet acceptance of their child’s induction of adult hood puts both Eva and Albert in the same position and counterpoises the romantic pell-mell with a weepy mood that might hit the movie’s target audience hardest. But when all is said and done, witty, sophisticated and intrinsically funny, ENOUGH SAID might be quintessentially televisual in its building blocks, but no one should disparage its illuminating relationship tenet in the nucleus. 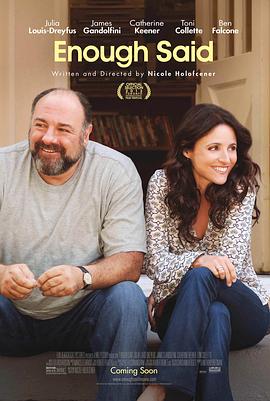